Olive, our dog, got a new toy for Easter. Meet Cerdito (little piggy in Spanish) as we affectionately call him. 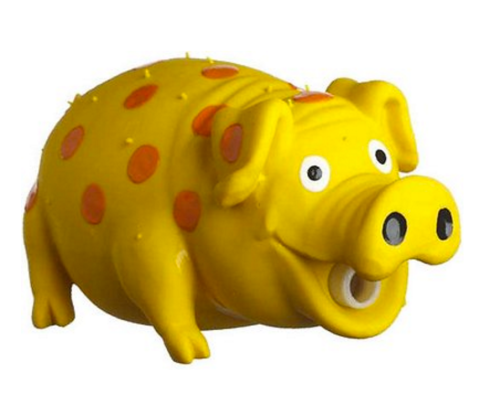 Looks the same, but Olive’s is green. As I sit here, Olive is chewing and the little toy grunts away. It has this odd sound mechanism that makes me feel like I’m sharing my bedroom with a baby boar. Her zeal for this creature makes me laugh.

Sometimes it’s the little things that are enough to get you up and out of bed and writing.

I was reading my dad’s obituary yesterday. It’s still online and when I miss him it can be helpful to look at the long list of memories that other people shared on his site. I stopped when I read the phrase, “… is survived by….”

I wrote his obituary with my mom, an ugly obligation when you are the writers in the family. I remember being in her bedroom. Mom sat on her blue upholstered couch, I across the way perched slightly higher on her four poster-bed. With rounded shoulders and our chins in our hands we asked each other, “Do we have to include that phrase?”

“I hate that saying,” I’m pretty sure I murmured. “It doesn’t make any sense.”

I never used to understand that phrase. Survived by. I mean sure, that makes sense if we were all in a terrible accident. If the cause of death was a storm, or a bus, or a tragedy that we were all involved in. If we were the ones to get out of the car and walk away scratch free. I didn’t survive his heart attack. I didn’t survive anything in the few days, weeks, early months of loss.

We included the two words.

As humans, all of us are going to have to at some point – sorry Charlie.

I went to Good Friday service last Friday. This year the death part of the Easter story hit me differently. The pastor gracefully explained how deeply Jesus suffered on the cross – not in brutal, gory detail, but rather in focusing on the emotional exhaustion that comes from death.

Jesus experienced it too, hanging on the cross, crying out to God “Why have you forsaken me?” He experienced how breath becomes shallow, how head hangs low, how heart and spirit feel ripped away from the Creator of the Universe.  Jesus died. In dying, he felt the things that feel very much like grief.

Grief can be unbelievable lonely, even when walking with people who lost the same person as you. On Friday, sitting in church in the dark, listening to Jesus’ final seven phrases, it hit me; Jesus has been through death too. This made me feel just a little bit better, a little closer to God, a little more hopeful, less lonely in the beginnings of survival.

On Sunday, I yelled “He is Risen” with enthusiasm. For Jesus rose again to take on our suffering, to walk with us through the dark, to say to ME “I get it. I’ve been there too.” This common ground never made sense to me until just this week. What a beautiful thing.

I think survival is an interesting concept. Day to day we, as humans, are surviving. By breathing air and eating food and drinking water we make choices to keep on going, despite hardship. Death can be hardship, so can a million other things.

Yet choosing to find joy as the thread that connects all of the horrible can be a beautiful thing.  I’ll end my thoughts this week with a list of the beautiful threads of joy that have helped me begin to be a survivor of death of a loved one.

It is a new identity I’m tentatively beginning to put on – one arm in the sleeve of a scratchy sweater, not yet worn enough to be soft on my skin.

Those silly grunts from a pig, and tears, and communion in individual plastic cups.

New jobs for my husband, and naps, and spaghetti.

In meals cooked by my brother, breakfasts at the lunch counter at The Silver Grill.

Afternoons spent at my in-laws.

In acknowledging that we all, at some point, are going to survive something.

Baby feet and burp cloths. Diaper counts and tears. Bottles and formula and suction and slurps. This is hard work.
Haven't gotten my hair done since January. Stepping into a salon with a six week old feels like a magnificent luxury. I can't wait to let someone else wash my hair.